Kindness. Some people say it’s something we just don’t experience enough of these days. While I try to always find the good in a situation and I’ve definitely been accused of being an optimist more than once in my life, even I have to admit that oftentimes, people just don’t seem to be as kind as they once were. Today I saw a gentle reminder that there is still good in the world and it made me think about how it all starts at home.

We have a tradition in our family that the birthday child gets a special meal and they can choose anywhere they want to eat out. For his 5th birthday, my son wanted to go somewhere with a playplace. It was midday and most children were in school or daycare, but two sisters showed up to play around the same time.

I never know quite what to make of other children in public places like this. On the one hand, it’s great when your kids have someone else to play with. On the other hand, sometimes the kids are brats. Usually you can get a pretty good idea right from the start of what kind of playmate the kids will be. 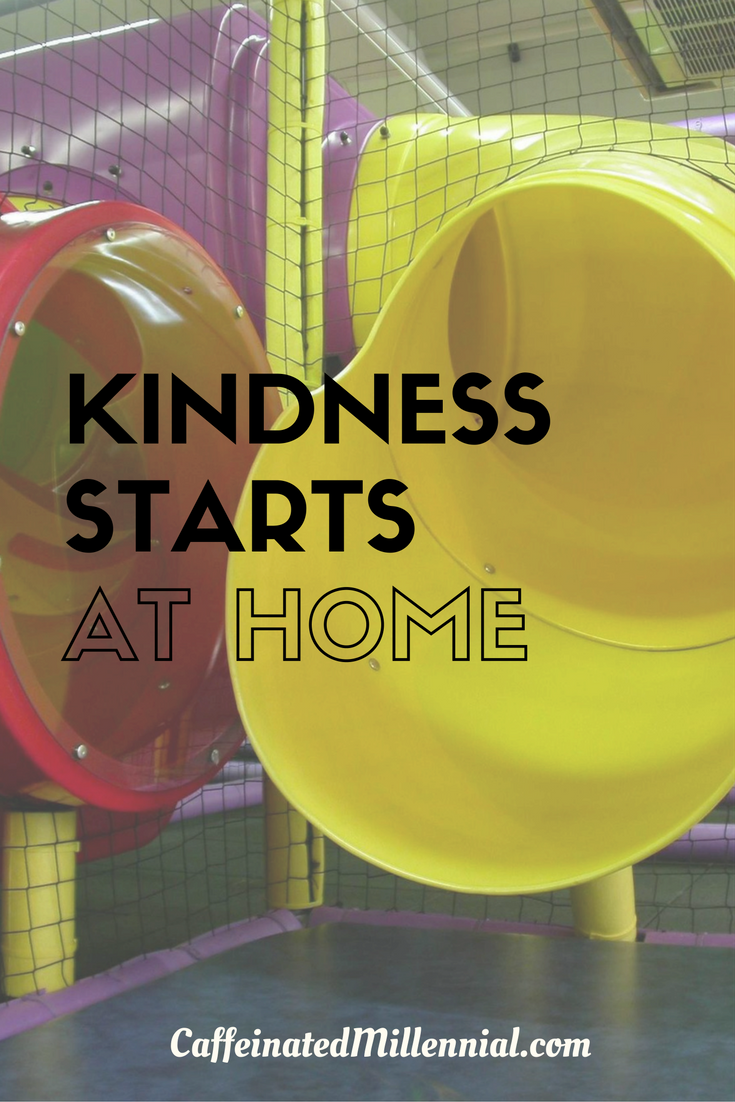 These girls were young – one possibly his age and the other younger (around 3). They were nicely dressed with their hair done up real cute and adorable little winter boots. They sat down with their father to eat first and all three said grace over their meal. You could tell this was a routine the girls knew well. It’s not the religious practice itself that I make note of, but rather the routine. They knew this was expected of them, just as they were expected to sit quietly and eat their meal before playing.

They ate quietly and politely and once finished, got up to join my son on the playground. The older of the two girls took off right away, running after my son, as the two strangers acted instantly like best friends (aren’t little kids great?) but the younger was afraid to climb. Nearly instantly, her big sister realized this and began encouraging her to try to climb up.

Then the father (who was on his phone at the time) came over, took off his own shoes and said, “Let’s do it together.” His older daughter came down to do the same and as both said to the youngest of the sisters, “Let’s do it together” she began to climb up, tentatively at first, but then with more confidence.

My son cheered her on and with that, she was off! She climbed and played with the other two, no longer afraid. When their excited voices grew too loud, the father would gently remind them to be quieter. This was clearly a family who cared for one another, did things together, and raised their children with respect.

I’ll admit, it’s tough not to be judgmental sometimes when it comes to children in public places. You never know someone’s story and you also don’t know what an individual child’s abilities. I have children with special needs so I get this completely.

That said, some of the rudest children I have ever seen in public have equally rude parents. The kind of people who cut you off in traffic, try to run over pedestrians in a crosswalk, always seem to be “too busy” to even look at their children and are often on the phone yammering away (usually complaining) while their child does who-knows-what on the playground.

It’s refreshing to see good parents raising polite, kind children. It’s wonderful that my five year old can play with new friends on the playground and not worry about getting kicked, pushed, punched, or name-called (yes, it’s all happened before). More than anything, I think it’s great to see walking examples of the fact that kindness starts at home.

Yes, we know this. We’ve heard the phrase before and we know that children mimic the world around them. There are exceptions to the rule but in general, kids reflect the home life in which they live. I truly believe that most parents mean well but that they sometimes get so caught up in the busy nature of life that they slip up. They forget their children are watching. They forget to teach them what really matters.

They practice “Do as I say, not as I do” and they expect it will work. Then they act shocked and embarrassed when their children act like little snots in public.

Sure, children make mistakes. They often act unexpectedly and it’s not always the parents’ fault. That’s not really my point here. The point is that true kindness, true goodness, respect for self and others… that’s something that begins at home and when a parent has been living that example, it shows all over the children. It truly makes the world a better place.

What Makes Essential Oils So Useful?
7 Tips to a Better Kitchen
4 Tips to Help You Save on Beauty Products
Are There Really GMOs in Tampons?
Awesome Peppermint Bark Recipe