When I first launched this site, I knew that I wanted to write about important things. I didn’t want to create “yet another Mommy blog”. There’s nothing wrong with “mom blogs”, and I do my fair share of parenting and life posts. That said, I knew I wanted this to be a safe place to discuss more important matters, and more serious matters, when the need arises. You may have read my post about growing up without a father, or the one about Father’s Day with an absent father. Or maybe you read my post about dating a narcissist. The post, How Journaling Saved My Life touches only briefly on the experience of domestic violence. This is only the tip of the iceberg of subjects I want to cover here.

I don’t want it to be all-serious, all the time. Everyone needs a break from the troubles of life now and then. That’s why I include my fair share of fun stuff, too. However, the time has come to address something really important. I have more recipes in the queue for you, some dating articles, and parenting advice pieces… but I just didn’t feel right posting about these things with what’s happening in our country right now. We have more important things to discuss. Life doesn’t simply go on. It cannot. It should not. 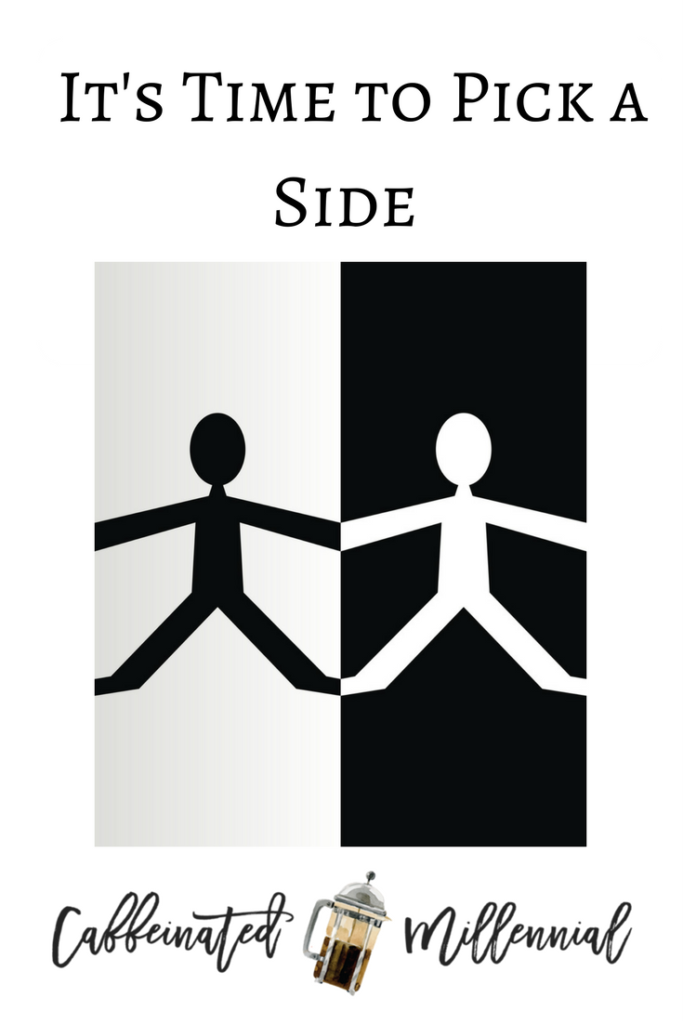 When things like this happen, we might feel angry. We might also feel impotent, helpless, and frustrated. Still, we must avoid doing nothing. You CAN do something. You SHOULD do something. If you are from a privileged (white) class, it’s even more important that you stand up and add your voice of support. Do not make those less privileged fight alone. Do not allow the oppressed to stand solo. If you’ve been neutral up to this point, the time has come to decide what you stand for.

“We must always take sides. Neutrality helps the oppressor, never the victim. Silence encourages the tormentor, never the tormented. Sometimes we must interfere.”
Elie Wiesel (1928-2016), writer and Auschwitz survivor

The time has come to pick a side. There is no room for fence-sitting in a time like this. We can not sit idly by and watch the world fall apart all around us, doing nothing.

Virginia is a state I am very familiar with. I was raised in Virginia and much of my family still lives there. I have great friends in Charlottesville. It pains me to see this happening to the community. This is a wonderfully diverse, progressive area and most people from the area will tell you that they do not support the alt-right or white supremacist agenda in any shape or form.  The people who marched in Charlottesville don’t represent all of Virginia. In fact, many, including the driver who plowed into the crowds of counter-protesters, were not even from the area.

That said, racism was very much alive when I was a little girl. I grew up in southern VA and I saw KKK march in the streets, try to recruit from Boy Scouts and even the public schools, and set our neighbor’s lawn on fire because they were an interracial couple. I saw generations of hatred, ignorance, and very blatant racism in most of the communities I grew up in. The law may have de-segregated us, but the south still very much self-segregated. There were “black churches” and “white churches” and even different shopping centers. I was practically an adult when I first met a Jewish person, or a Muslim person. One of my very best friends was black and while she was allowed over for sleepovers (many white families still didn’t allow this), I was once asked, “What do they eat?” as if they were a different species from us. This was in the 1990s!

Even as a very young child, I knew there was something wrong.  My mother, always one to go against the grain, taught me inclusiveness. She said racism was “a bunch of BS” and I still agree with her on that sentiment. She taught me not to judge people by the color of their skin, or their last name, or where they were from. She taught me that all people should be treated equal, although it was very clear to even my young mind, they were not treated as such. I didn’t understand it – the racism, the bigotry – but I knew I wanted no part of it.

I would move away from this small town when I was 16 and never look back. I lived in areas rich in diversity (and still do today). For that, I am grateful. A visit two years ago to see my family, just a hop over the Virginia border into North Carolina, I was greeted by one of the most racist, bigoted communities I would ever encounter. I was threatened, and my children were threatened, for being different. For almost 18 years, I had been away, living in multi-cultured communities in Southern California, and Austin, Texas. I was admittedly shocked that this part of the country hadn’t seemed to have evolved from my childhood days.

Sill, I visited before Trump was elected President.

It would only get worse after that.

Phrases like, “I’m not racist, but they have their place and we have ours” are uttered without hesitation. (And by the way, you can count that anything someone says after “I am not racist, but-” is going to be racist.)

White people throw the N-word around like it’s nothing.

Human rights are stomped on left and right and no one seems to care.

This current President only empowers them.

Closet racists no longer have to hide.

Battles are being fought in our streets every day and the outcome of this war will make or break the future of our country. It’s time to do something.

The Poem of the Protests

Martin Niemöller (1892–1984) was a prominent Protestant pastor who emerged as an outspoken public foe of Adolf Hitler and spent the last seven years of Nazi rule in concentration camps. Martin Niemöller’s lines, written just after the Holocaust, argued against apathy—and for the moral connectedness of all people.

First they came for the Socialists, and I did not speak out—
Because I was not a Socialist.

Then they came for the Jews, and I did not speak out—
Because I was not a Jew.

Then they came for me—and there was no one left to speak for me.

How You Can Help

When you first hear of something like this, you probably need time to process. Most people do; and that’s normal. Once you’ve done that, you may feel called to action. You want to do something about it, but what? It’s not enough to sit back and say, “Oh what a shame!” It’s not enough to do nothing. We CAN NOT be complacent. To do so is to condone the evil actions.

Now, if you’re ready to take action, here are some organizations that would welcome your support, especially now:

Black Student Alliance at UVA is doing the work (consider sharing some kind words on Twitter, too.)

Meals on Wheels of Charlottesville serves nutritious meals to many individuals, particularly homebound seniors who may have no other visitors.

African American Teaching Fellows is an organization working to increase diversity among teaching staff in a system where only 10% of educators are African-America.

Brody Jewish Center of the University of Virginia is the Hillel branch at UVA (and here’s a good primer on the long history of the Jewish community in Charlottesville, thanks to the Institute of Southern Jewish Life).

Congregation Beth Israel is the only synagogue in Albemarle County. Drop them a kind email and tell them you’d like to donate.

IMPACT Charlottesville is an interfaith organization working for social justice.

The Women’s Initiative provides mental healthcare to women regardless of a patient’s ability to pay.

The Arc of the Piedmont helps adults with intellectual and developmental disabilities.

The Virginia Centers for Independent Living comprise an organization that helps adults with disabilities to lead independent lives as full members of their communities.

Legal Aid Justice Center provides legal assistance to low-income individuals and seeks equal justice for all who live in Virginia.

The Haven provides respite and care for homeless folks in downtown Charlottesville.

Interntional Rescue Committee has an office in Charlottesville, where they work to settle refugees in the surrounding area.

Great Expectations works through the whole state of Virginia to help foster youth (a vulnerable and diverse population of young people) transition to work and community college.  GE provides mentorship and guidance for the hundreds of youth who age out of foster care and services each year.

The Southern Poverty Law Center is demanding President Trump take responsibility for the hate that he has unleashed:

At this point, it’s not enough for Trump simply to condemn bigotry. He must take responsibility for the surge in white supremacy and hate that he has unleashed. He must:

The events in Charlottesville demand nothing less.

In memory of Heather Heyer, I stand with Charlottesville. In the memory of all of those who have died fighting for basic human rights that should come freely and without expectation to all humans, I stand against hate. So that my children, and your children might have a better future, I stand against racism.

What will you do to help today?